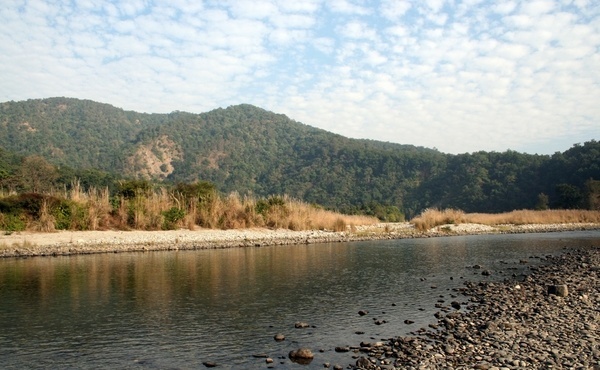 Lying at the foothills of the Himalayas, Corbett is not only India's very first National Park, but also its most beautiful. The 520 sq kilometers area of the park encompasses hills, river valleys, thick forests and grasslands, making it home to a large array of wildlife. Corbett National Park is also covered under the Project Tiger, which is the largest wildlife conservation initiative ever undertaken.

Day 1 - Corbett
Drive by private car with chauffeur from Delhi to Corbett. It takes approximately five hours to cover the distance of 260 km.

Day 2 - Corbett
Set out early morning for an exciting safari on elephant back or by jeep to try to get a glimpse of the tiger. You are likely to see the varied wildlife - elephants, leopards and Himalayan black deer. The grasslands are favourite spots for the pretty spotted chital, the large sambhar and barking deer (which calls out its distinctive bark on sensing a tiger on the prowl). The smaller wildlife includes the monitor lizard, fish-eating crocodile. Watch out for the incredible range of birds: darters, cormorants, crested serpent eagles, black eagles, peregrine falcons ... the list goes on to a total of 580 species! You return to the resort for a late but large breakfast. The afternoon is free to relax. Later in the afternoon is another jungle safari to try and spot wildlife.

Day 3 - Corbett
On this day you take an excursion by canter into Dhikala, the heart of Corbett National Park. The park embraces the picturesque broad flat valley consisting of vast Savannah and surrounded by hills, crisscrossed by small rivers, providing habitats for different species of wild life. The Ramganga river meandering its way through the park with some deep pools and foaming rapids forms the main water source. Good size patches of thick elephant grass growing along the river banks and moist localities make excellent habitat for the tiger.

Corbett The `Man Eaters of Kumaon'

Corbett National Park was India's first national park and remains one of its finest. It is named after the legendary hunter Jim Corbett who lived in this area for many years and wrote the book `The Man Eaters of Kumaon'. Extending over a tract of 520 sq. km., the sanctuary is endowed with breathtaking natural beauty and an abundance of wildlife including tigers and elephants. The birdlife is especially impressive with over 500 species.

The Tiger Camp Resort is located on the periphery of the stunning Jim Corbett Na...